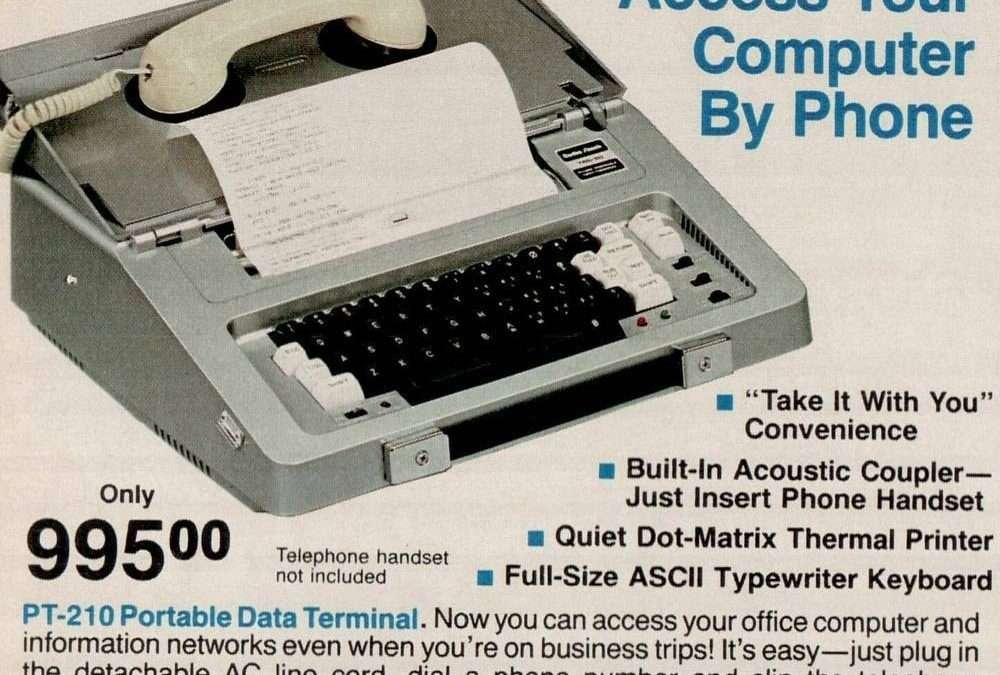 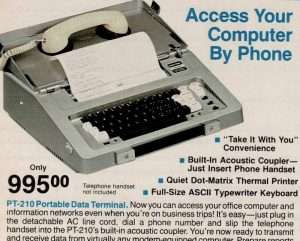 Ad for the Radio Shack PT-210 Portable Data Terminal, 1983. “Access Your Computer By Phone” – this device was essentially a portable version of the Teletype terminal we used at Brother Martin High School twelve years earlier. The PT-210 included an acoustic coupler modem and a thermal printer. The modem section folded over on top of the keyboard. Once secured, the user grabbed the handle and headed out.

Business computing operated as an office-based function in the late 1970s/early 1980s. While personal computers emerged at this time, enterprise computing meant mini-computers and mainframes. An ASCII terminal such as this easily connected to non-IBM systems, such as Digital Equipment Corporation (DEC) PDP minicomputers. In the mid-late 1970s, DEC PDP-11 models were extremely popular in the oil/gas industry. Oil/gas production companies placed PDP-11s on platforms in the Gulf of Mexico. They also operated these computers in data centers in New Orleans and Houston. Teletype terminals linked via serial cables to the computers. Acoustic coupler modems connected remote users.

Teletypes were big, bulky, and expensive. The modems had to be at least the size of a standard telephone handset, as seen here. The user dialed up the modem in the data center. When that modem picked up, it transmitted tones the remote modem would understand. The user placed the handset in the acoustic coupler. The circuit in the terminal completed the link. This technology remained in place well into the late 1990s. When using a direct-connect (phone cable to modem) link, the modem’s speaker still echoed the sounds coming from the handset. The quality of the connection improved, since those later modems didn’t require “listening” through a handset.

As high school students, we wrote programs in Beginner’s All-purpose Scientific Instruction Code, BASIC. When our intrepid teacher, Brother Neal Golden, SC, was ready, he would dial up a DEC mainframe on the teletype, and we would upload and run our programs. By 1973ish, Brother set up an arrangement with a local company to use their DEC PDP-11. Because that connection was a local call, we could “call” the computer and establish the modem connection ourselves.

So, who used the PT-210? This device sold well with business users requiring rapid response. You’re sitting down after dinner, and the help desk calls. There’s a problem with a production program. Time is money in the oil/gas business, so spending $995 on a device to fix that problem was nothing. At home or on the road, a phone was usually available, and in the operator or programmer went.